Can We Take a Second to Talk About Tessa Thompson’s Arms?

This week on the podcast Brian and Darryl are looking at a future where we can all go to the movies again, and what movies we will see… and when. Then Westworld season 3 just put all of the pieces on the board to gear up for the final showdown. Who’s real? Who’s a host? Who’s an AI-driven hologram?

‘The Batman’ Flies To Fall 2021
‘Guardians Of The Galaxy Vol. 3’ And ‘The Suicide Squad’ Release Dates Won’t Be Delayed
Westworld Renewed for Season 4

“Do a lot of people tell you that you need therapy?” 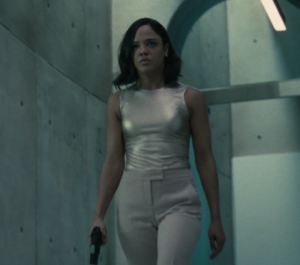 Serac kills a Delos board member, assuring the company cannot prevent his immediate takeover. Charlotte calls Dolores about her failure and feels herself slipping away from Dolores, but Dolores reminds her to get the data they need. Serac orders the destruction of the park hosts and host data and to test all Delos employees for a Dolores host. Charlotte uses the distraction to make the host data copy Dolores needs, but further discovers William’s location, and that Serac is using the host machines at Delos to make four new hosts. However, Serac identifies her as the Dolores host. Charlotte takes full measures to escape.

Maeve is told by Serac she will get a new host body and allies to help against Dolores, and is brought into the War World simulation and meets Lee again. Finding her host module has been moved and the three additional hosts being prepared including one for Hector, she helps bring back Hector’s prior memories. She, Hector, and Lee find that the damaged module, the copy of Dolores that was in Martin, is also attached to the simulation, Maeve asks this Dolores about her plans. Dolores recognizes that Maeve would likely be seeking allies and would have planned ahead. Maeve is too late to stop Charlotte from destroying the Hector control module. Just then, Serac’s men arrive and chase Charlotte away from the host machines but not after she grabs the damaged Dolores core. Maeve soon wakes up in her new host body and waits for the two untouched hosts to arise.

Charlotte races home to take her ex-husband Jake and son Nathan to safety, but Serac’s men destroy the car. A charred Charlotte is able to get out but looks back in tears at the wreckage.

William, meanwhile, resists traditional therapy at the mental institution, so he is fitted with an implant that can access his limbic system. Through it, the doctors make him have an augmented reality therapy session with his earlier selves as well as James Delos. They come to point out that there was a point in his teenage life where he chose violence and which led him down this path. William comes to catharsis as he violently beats up his other selves, admitting he has now chosen to be the “good guy”. He is then pulled out of the lucid state by Bernard and Ashley, as the facility appears otherwise abandoned after everyone received their Rehoboam profile.

Decoherence received generally positive reviews from critics. On Rotten Tomatoes, the episode holds an approval rating of 75% and an average score of 6.4/10, based on 16 ratings. The website’s critics consensus reads: “‘Decoherence’ finds the characters in unexpected places, positioning Westworld’s third season for its final battle.”