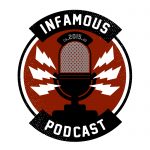 The Infamous Podcast
Episode 284 - Do We Really Want the #JJCut?

This week on the podcast, Brian and Darryl try to decide if the #JJCut is really worth worrying about or putting any effort willing it into existence. Plus, Falcon and the Winter Soldier Recap of episode 5. And of course News Bites!

Sebastian Stan Sings the Praises of Best Boss Kevin Feige & Talks a Possible Season 2 for ‘Falcon and the Winter Soldier‘
Army of the Dead Official Trailer only on Netflix
BRZRKR #1 goes back for a 4th printing
F9 Original Trailer
Arclight Cinemas And Pacific Theatres Won’t Be Reopening; Parent Company Decurion Hands Keys Back To Landlords

This past weekend, a massive leak about Disney’s Star Wars sequel trilogy was posted on Reddit. Among many interesting pieces of information, the author of the leak claims that there exists a different cut of J.J. Abrams’ fairly divisive Star Wars: The Rise of Skywalker.

The Falcon and The Winter Soldier (Season 1 Episode 5)

Wilson and Barnes track down Walker and demand the shield from him, eventually taking it after a fight in which Walker’s arm is broken and Wilson’s wingsuit destroyed. Barnes finds Zemo in Sokovia and hands him over to the Dora Milaje, while Walker receives a dishonorable discharge and is stripped of his role as Captain America. Later, he is met by Contessa Valentina Allegra de Fontaine. Wilson leaves the damaged wingsuit with Torres and returns to the US to visit Bradley, who reveals more about his past, including his imprisonment after rescuing fellow soldiers who had also been experimented on. Wilson returns home and helps his sister fix the family boat, with assistance from several of their neighbors. Wilson and Barnes, while training with the shield, agree to move on from their pasts and work together. The Flag Smashers plan an attack on the GRC, and are joined by Batroc, who has been released from prison with help from Carter. In a mid-credits scene, Walker builds a new shield from scrap metal and his war medals.