Episode 341 – Everything Everywhere is CRAZY! 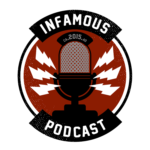 The Infamous Podcast
Episode 341 - Everything Everywhere is CRAZY!

When you Do Weird Ish you Jump Bodies

This week on the podcast, Brian and Darryl talk about stuff. Kidding! They talk about Everything Everywhere All At Once, The Boys and More!

Summary
Butcher meets Little Nina and negotiates the Boys’ travel to Russia in exchange for assassinating one of Nina’s targets. Upon learning of the V24, Hughie asks Butcher to let him use it; Butcher refuses, but Hughie secretly takes a dose and uses it to kill one of the Russian soldiers guarding a secret laboratory. Inside, Butcher discovers a still-living Soldier Boy, who releases an energy blast that renders Kimiko powerless and wounded before escaping. During a press conference regarding Homelander’s behavior, Neuman betrays Edgar by accusing him of corruption. In return, Homelander provides Neuman a sample of Compound V which she injects into her daughter Zoe. Annie recruits Maeve and Alex to help her face Homelander. Alex later attempts to recruit A-Train after witnessing him being mistreated by Homelander and the Deep. However, Homelander confronts Annie with Alex’s corpse, having killed him after learning of the planned coup from A-Train, and threatens to kill Hughie unless Annie complies with his demands.

Title: “The Last Time to Look on This World of Lies”
Directed by: Nelson Craag
Written by: Ellie Monahan
Release Date: June 17, 2022

Summary
Frenchie admits an injured Kimiko to a hospital, where she is overjoyed to learn she lost her powers. She and Frenchie bond and share a kiss, but Nina confronts him afterward with another assassination job. Hughie reveals his use of V24 to Annie. Maeve gives Butcher another batch of V24 before drinking and having sex with him. Homelander and Noir later find out about this and capture her. Following Edgar’s departure, Ashley is promoted to CEO of Vought. A-Train demands Blue Hawk, a Supe who has been racially profiling African-Americans in Trenton, New Jersey, to issue a public apology, but Blue Hawk incites a violent confrontation that injures several bystanders, including A-Train’s brother Nathan. Upon his return to America, Soldier Boy inadvertently causes an explosion, alerting the Boys. MM, Hughie, and Butcher visit the Legend, a former Vought executive, who reveals that Soldier Boy is looking for Countess. The Boys find her first and incapacitate her. When Soldier Boy arrives, Butcher suggests a partnership between them, but the former kills Countess after learning she sold him out to the Russians. Annie, who arrived at MM’s request, begs Hughie to not join Butcher and Soldier Boy as they leave, but Hughie reluctantly leaves her.

Everything Everywhere All At Once (2022)

Summary
When an interdimensional rupture unravels reality, an unlikely hero must channel her newfound powers to fight bizarre and bewildering dangers from the multiverse as the fate of the world hangs in the balance.