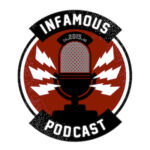 This week on the podcast, Brian and Darryl review the long-awaited ISOM #1 from Rippaverse Comics, and then talk about more Dragon Stuff!

Summary
Avery Silman is a common rancher, but that wasn’t always the case. After obtaining some unique abilities, Avery spent a brief stint being a hero under the moniker Isom in the city of Florepark, Texas. Realizing that it wasn’t for him, he walked away from this life.

House of the Dragon (Season 1 Episode 7)

Summary
King Viserys and his court attend Lady Laena’s funeral in Driftmark. Rhaenyra and Daemon reunite and are physically intimate. Viserys tries and fails to reconnect with Daemon. Prince Aemond claims Vhagar as his dragon, leading to an altercation with his cousins and nephews in which Lucerys slashes Aemond’s eye with a knife. Viserys denies Queen Alicent’s demand that Lucerys’ eye be gouged out as retribution. When Alicent lunges at Lucerys with Viserys’ Valyrian steel dagger, Rhaenyra blocks her; Alicent stabs Rhaenyra’s arm during the struggle. After claims that Rhaenyra’s children are bastards, Viserys decrees that anyone questioning their legitimacy will be silenced. Reinstated Hand of the King, Otto Hightower tells Alicent they will soon prevail. Rhaenyra and Daemon unite against Alicent and her supporters. Ser Qarl Correy appears to murder Laenor, with Princess Rhaenys and Lord Corlys believing that a charred body is their son’s. Meanwhile, Daemon and Rhaenyra privately marry in the Old Valyrian tradition to continue the pure Targaryen bloodline. Following his faked death, Laenor, his head shaved, secretly flees Driftmark with Ser Qarl.