Episode 360 – RIP Kevin Conroy, Thanks for All the Bats 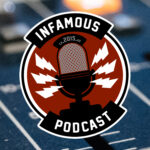 The Infamous Podcast
Episode 360 - RIP Kevin Conroy, Thanks for All the Bats

There is Only One True Batman

This week on the podcast, Brian and Darryl say goodbye to THE Kevin Conroy and then talk about a bunch of other news stories from Wakanda Forever to The Good Fight.